Discover Sardinia by bike and motorbike

For those who love cycling and motorcycling holidays, Sardinia offers a variety of places, views, itineraries and beaches to discover; lots of fun and mixed routes for motorcyclists with a network of comfortable roads that are spectacular for the ones who love to peddle, to appreciate with friends or the family at all levels of ability.

There are over 12,000 km of road suitable for motorbikes on the island, crossing mountains and along the seaside. There are itineraries for all abilities, many of which have drops and bends but with an excellent grip (up to 95%) and the perfect climate conditions almost all year round.

From Pula you can cycle to enchanted places and, following the panoramic road that runs along the sea, discover the magnificent ever-changing beaches, wild dunes and romantic bays.

If you look at the websites specialising in motorcycling tourism, they have recommended paths, such as the itinerary SS125 Orientale Sarda that starts by winding its way up mountains and ends with a gentle slope to the beach towards Muravera, or the Cagliari-Geremeas-Solanas-Villasimius route along the coastal road SP17, entirely made up of panoramic slopes and steep turns overlooking the sea. A route suitable for all abilities and family groups is the one that starts in Pula and leads you to Porto Teulada (38km, SS195) running next to the most beautiful beaches in south west Sardinia; Santa Margherita di Pula, Chia, Tuerredda and many other secret creeks and beaches along the coast until Teulada.

Carrying on from Capo Teulada you can stop at Porto Pino, visit Sant’Antioco, and even take a ferry from Porto Vesme to Carloforte, on the magnificent Island of San Pietro. Following the SS 195 by motorbike in the opposite direction, towards Cagliari, then turning onto the SS 130 towards Decimomannu, direction Iglesias, the coast to coast ride from Pula to the Costa Verde (109 km) is complete! The route initially runs inland then along the Beaches of Fontanamare, by the stacks of Portu Banda and to the formal mine site of Masua, right in front of the small island of Pan di Zucchero. For an alternative east to west route leave the SS 130 turning towards Siliqua and join the SS 293 passing through Giba and Porto Botte, arriving to the Gulf of Palmas and to the island of Sant’Antioco.

The bike lovers will find a variety of routes suitable for families and professionals in Southern Sardinia. Particularly the area around Pula, “Sulcis”, offers a wide choice of itineraries.

Visit www.piste-ciclabili.com for more information about Sardinian bike tours (one of the tours is pictured on the map below). There are 525 km of panoramic on road bike routes. The routes maximum gradiant is 28% and highest drop is 552 m. A tour suggested for professional bikers is the one that starts south of Domus de Maria, near Chia, passes through Cape Teulada and arrives at Santadi village; a 53 km mixed route through an isolated and wild landscape with plenty of hills to climb.

The breathtaking view of the sea shore and the beautiful white sand beaches make up for all your effort. Cagliari is easily reached, only 33 km north of Pula, but watch out for the commuters’ traffic! South of Pula there are magical and unique places to visit while cycling with the family along the coast; the archeological site of the ancient Roman village of Nora, the incredible white dunes of Chia and the quiet Teulada Marina. The app sardegnaturismo.it displays a tourist guide for off-road routes suitable for the mountain bikers, among other useful information. 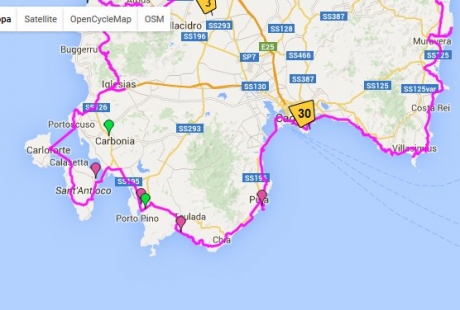 Lantana Resort & Apartments in Pula is a perfect starting point for motor bike and bike tours in Southern Sardinia; the hotel has welcomed many bike and motorbike enthusiasts over the years who spend their active holidays in Sardinia. Those passionated 2-wheel tourists benefit from several useful hotel services, such as gated private parking with a covered bicycle rack, information about the routes, bike, motor bike and scooter rental, information and directions to the local official workshops and the choice to have a superb packed lunch prepared by the chef Lorenzo!

For any further information or for bookings do not hesitate to contact us on +39 070 924411 or info@lantanaresort.it

This website uses cookies, third-party cookies included, to improve your experience and provide you better solutions. By closing this banner, scrolling this page up or down or by clicking on any of the elements of the page, you accept the use of these cookies. You can find complete information click here
OK